The Culberson County-Allamoore ISD Board of Trustees met in Regular Session Monday. Supt. Ken Baugh presented documentation on current wages compared to median wages in the area and compared to state base pay. Baugh noted that raises had not been granted in several years, but noted that teachers get automatic step increases through their 20th year of service. Teachers also receive stipends for various athletic and academic duties outside of regular classroom teaching duties. Baugh recommended that the District grant a 2% across the board raise, and recommended various adjustments to the stipend schedule to include a Gifted and Talented stipend of $1000 that would be available to any interested teacher. A 2% increase would increase the District budget by $49,000 plus the recommended increases in stipends.

Trustee Eddie Seyffert questioned, “why not raise the teachers to the median wage?” Baugh noted that while the cash flows stay healthy, the District can afford increased salaries, but if the tax base were to drop, the District would be in a bind to fund all the teachers at the higher level. He recommended that the District make the increases slowly but steadily. Seyffert noted that if the District only matches inflation, CCAISD will never match the median, stating that “2% is not enough.” At this time, although CCAISD is above state base, it is about $4,000 below the median wage for teacher salaries in the area. Baugh noted that some of this is made up through generous stipends.

Trustee Angie Gonzalez stated that she “wishes we could give them more,” while Trustee Sandy Garibay noted that “this is a start…and [the District] could look into tackling raises with 313 funding” in the future, indicating she preferred “the safety net” of Baugh’s recommendation. Long-term board members noted that they did not ever want to go through a RIF (reduction in force) again.

Ultimately, the Board unanimously approved the updated stipend schedule for FY 2018-2019 and approved the 2% salary increase with Seyffert voting against the motion indicating that he thought the increase should be more.

The CCAISD Board presented Florinda Gomez with a retirement plaque for 25 years of dedicated service to the District. Although officially retired, Gomez will continue to work part-time for the District.

Sondra McCoy reviewed the 2017-2018 Accountability Ratings with the Board. McCoy noted that single-campus Districts, such as CCAISD, did not receive letter grades, but will be subject to the new A-F ratings for the 2018-2019 school year. These Districts and individual campuses will be ranked according to whether or not they “Met Standard,” “Met Alternative Standard,” or “Improvement Required.”

CCAISD “Met Standards” in all three performance areas as well as receiving a Distinction in Post-Secondary Readiness. The District scored 68 out of 100 points to meet the required standards. Supt. Baugh reported that Ms. Barrandey’s 5th-grade science class had achieved an 86% on their STAAR tests and were rewarded with a sleepover at the school.

The Trustees received an update on the K-12 Campus construction project from HB Construction Manager Manuel Quinones. He noted that, so far, the rain had not yet caused a delay in the construction schedule. The project is still on schedule for the April 25, 2019 completion date.

Athletic Director Brock Tyrrell reported on his department. He informed the Board of upcoming athletic events and reported on results from recent events. Tyrrell expressed pride in the Eagle Football team with their determination to fight to the very end whether up or down on the scoreboard. Tyrrell also acknowledged David Corrales’ recognition as player of the week by the Odessa American. He also gave kudos to cross country runner Brian Dominguez for his assistance to a fellow runner. Tyrrell expressed pride in the character displayed by Dominguez while jeopardizing his position in the field. Dominguez still managed to exceed his prior personal record even with the delay.

Principal Charles Gonzalez reported that enrollment stands at 385 and attendance at 96.69%. Gonzalez informed the Board that he had been making home visits regarding attendance issues, noting that he is getting ready to go to court for truancy cases involving unexcused absences. He stated that cases have not been filed in four years.

• Held an executive session regarding economic development with no action taken.

• Discussed contracting with a part-time RN to oversee the existing staff.

• Nominated Jodi Corrales as a candidate for the CCAD Board of Directors. 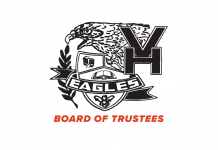 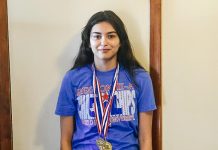