Apolinar “Chico” Guerrero Jr, age 85, passed away on February 9, 2020 in Van Horn, Texas. He was born on September 23, 1934 in Gonzales, Texas to Apolinar Sr. and Delphina Guerrero. Chico was a lifetime resident of Van Horn. He worked for the Allamore Talc Company, was a mechanic for the Chevron Truck Stop and also with irrigation systems for farmers. He was a devoted and loving husband, father and grandfather. He was always caring and he loved to help people who were in need. Chico was cared for by his loving wife and family from 1981 to 2020 due to Illness. He will be truly missed.

Chico is preceded in death by his wife Estella Guerrero and his parents Apolinar Jr. and Delphina Guerrero.

A rosary was held Wednesday, February 12 and funeral mass will be at 10:00 a.m. on Thursday, February 13, 2020 at Our Lady of Fatima Catholic Church, 309 Almond St. in Van Horn, officiated by Father Apolinar Samboni. Burial will follow at The Van Horn Cemetery. 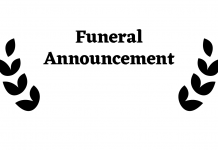