Fescue Rescue: An Endangered Grass Embodies the Beauty, and Fragility, of the “Sky Islands”

Camp this summer in the Guadalupe, Davis or Chisos mountains – the West Texas “sky islands” – and you’ll awaken to a symphony of birdsong. As the sun bakes the land below, you’ll walk in hidden canyons, shaded by oaks, junipers and pines. Hummingbirds will dart overhead, in meadows thick with wildflowers. You’ll see wildlife and its traces – a deer in the brush, ringtail scat on the trail, the tracks of bears and mountain lions. Amidst the desert “sea,” these ranges truly are “islands” of abundant life.

Nothing embodies how special they are, and how fragile, like a certain elegant grass. Guadalupe fescue once had a wide distribution in Chihuahuan Desert mountains. In the U.S., it’s now found only in a single canyon in Big Bend National Park. Botanists from both sides of the border have teamed up to save it, and in the process, they’re gaining insight into this rare desert-mountain native.

Dr. Helen Poulos is a botanist at Wesleyan University, who’s studied forest ecology in the borderlands for two decades.

“One of the most rewarding things about the project is working truly as this binational team,” Poulos said. “I’m on What’s App all the time with my Mexican collaborators. Both on the Mexican side and the U.S. side, we both feel really cool about this international collaboration.”

With a host of fellow scientists, Poulos is working to rescue Guadalupe fescue. The plant was designated an endangered species in 2017.

As its name suggests, it was first identified in the Guadalupe Mountains, in 1932 – at a single location in upper McKittrick Canyon. It hasn’t been seen there since the 50s. When Poulos and her partners began their study, there were only two known populations – in Boot Canyon, in the Chisos Mountains, and in the Maderas del Carmen – a protected area opposite Big Bend in Mexico. The Carmens population numbered fewer than 200 plants.

Big Bend park staff have kept a close eye on their fescue for decades. But restoration has meant taking a new look at the plant’s life history.

“I’ve worked on a number of endangered plants,” Poulos said, “and this is always the head-scratcher: What makes this thing tick? A lot of times we don’t know what makes a rare and endangered plant tick, because we don’t have a lot of information about that species.”

How did this grass become so rare, its populations so isolated?

Many plants in today’s sky islands are “climate relicts.” In the lushness of the Ice Age, pines, oaks and junipers grew across the landscape here. But as the climate shifted, such plants migrated to the mountains – as the last sanctuaries of cooler, wetter conditions. That is almost certainly the Guadalupe fescue’s story.

The scientific team soon made exciting discoveries. Javier Ochoa, manager of the del Carmen protected area, found three new fescue populations there. And Jesus Valdés-Reyna, a botanist at a university in Saltillo, Mexico, found fescue in a range in Coahuila – 400 miles south of Big Bend.

The fescue grows in a variety of settings: in pinon-juniper woodlands, in oak forests and amidst pines and firs. But the locations have key features in common.

The populations are all between 6,800 and 7,800 feet in elevation – the grass clearly needs the cooler, wetter conditions that altitude provides. And in those highlands, the fescue lives in the more forbidding niches.

The dominant grass in these mountains is piñon ricegrass. Robust and fecund, it produces seeds in abundance and thrives after forest fires. Guadalupe fescue, by comparison, is “dainty,” Poulos said, and can’t compete with its burlier neighbor for the prime real estate. The fescue has to make do with rockier, drier, steeper terrain.

The scientists collected seed – and Karen Little, at the Sul Ross State University greenhouse, and Saltillo botanists are cultivating fescue. A New Mexico scientist has successfully germinated seeds gathered in the Chisos decades ago. The team will plant these grasses near existing populations this fall. Because those populations need help.

Some grasses are “fire-adapted” – low-intensity fire can actually benefit their populations. It’s not clear that’s true for the Guadalupe fescue. In 2021, the South Rim 4 Fire killed half of the fescues in the Chisos Mountains. After the fire, only 11 plants were found to be producing seed – compared to 200 plants the previous year.

Guadalupe fescue may well have been rare long before modern human impacts. But there’s no doubt human activity is having an effect. In the past, livestock grazing may have been a factor. And in Big Bend, inadvertent trampling by hikers can damage or kill plants.

Then there’s human-driven climate change – and the intensifying heat and drought it brings. Guadalupe fescue, like other sky-island flora, has found refuge in the heights. But those heights have limits, and the fescue is already growing near the foot of Emory Peak, the summit of the Chisos.

“What happens when these mountains sort of ‘blow their top’?,” Poulos said. “There’s nowhere for these plants to march upslope much more. I would say climate change is the biggest threat.”

Endangered species can distill or embody the threats to a broader ecosystem. The Guadalupe fescue does that for our region’s sky islands. They’ve long been precious sanctuaries in an arid land – for diverse species, including our own. Their future is uncertain. 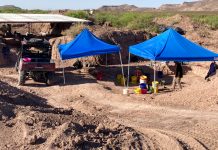 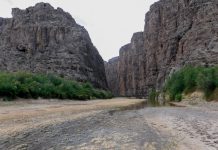 Nature Notes | In a Watershed in Crisis, Scientists Work to Understand, and Save, the Desert Fish of Big Bend