3:50 p.m. This story has been updated with comments from El Paso District Attorney Yvonne Rosales and state Rep. Joe Moody.

District Attorney Yvonne Rosales should be removed from office because of incompetency and official misconduct, according to a petition filed with the El Paso District Clerk’s Office on Wednesday.

The case, which Rosales called an assault on the political process, was assigned to the 346th District Court presided by District Court Judge Patricia Baca.

The petition triggers a rarely used mechanism for removing an elected official in Texas, a process that could take months to resolve. The petition was filed by defense attorney Omar Carmona, who represented a capital murder defendant whose charges were dismissed in 2021 after a judge ruled that the District Attorney’s Office had engaged in prosecution vindictiveness.

Carmona asks that Rosales be temporarily removed from office while the courts consider his petition.

The effort to oust Rosales, a Democrat who was elected in 2020, comes after months of turmoil in her office, including the dismissal of hundreds of cases because of a failure to seek indictments in time, and controversy over the handling of the Aug. 3, 2019, mass murder at the Cielo Vista Walmart. 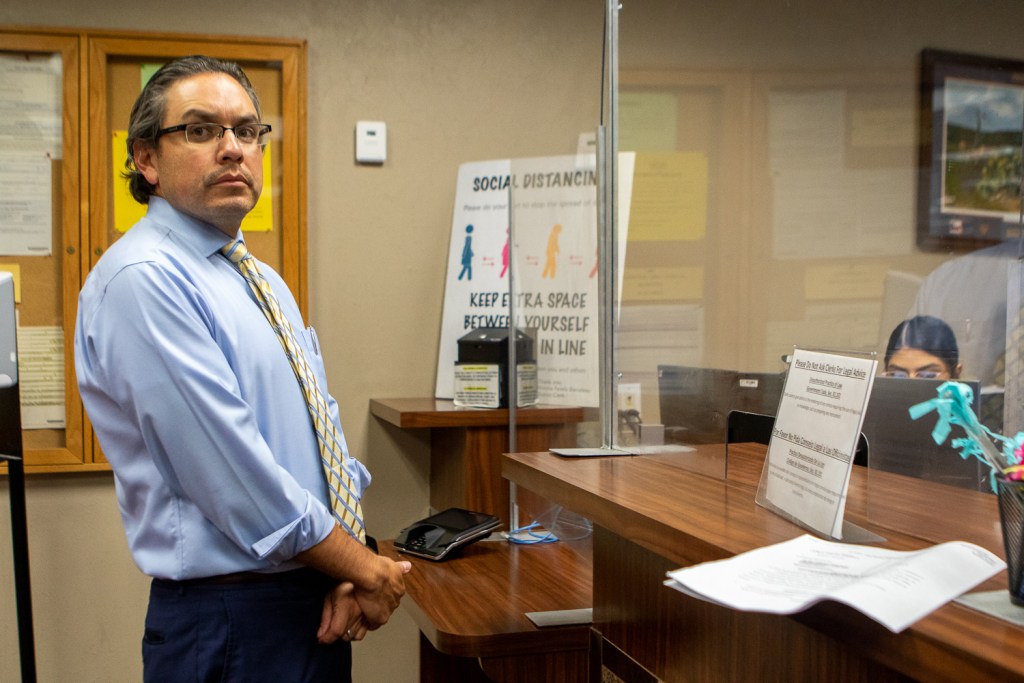 “Since August 3, 2019, our community has come a long way. We have healed together, we have grieved together and we’ve cried together … but we still don’t have that final closure,” Carmona said. “So it’s time for a change and it’s a change we cannot wait for. We cannot wait for the next election cycle. It has to be done right away.”

Rosales has said the problems are not her fault, instead saying they stem from the effects of the COVID-19 pandemic and alleged failures by her predecessor, longtime District Attorney Jaime Esparza. The Covid-19 pandemic has caused backlogs across the court system nationwide, with larger jurisdictions such as Harris County seeing a backlog of 94,000 pending cases.

“We believe that it is a frivolous attempt by an attorney who has actively been attacking the administration for many months now in regard to a case which is pending on appeal,” the statement reads. “The District Attorney is committed to serving the community of El Paso. Every attempt will be made to address and fight this petition. In a democracy, people vote for their elected officials. This is an assault on the electoral process in a manner designed to undermine our democracy.”

“As someone who believes in our system, I’m always leery about anything that puts a decision about who represents the people in any hands besides the people. We have a removal system, and that’s an election in 2024,” said Moody, one of the Legislature’s leading voices on criminal justice issues. “That said, I’ve never witnessed such gross incompetence — it’s not only embarrassing, it’s dangerous and disgraceful. A lot of El Pasoans are going to be hurt before 2024 by the very person they should most be able to rely on.”

The petition alleges that Rosales should be removed because of a number of actions since taking office. Many of the issues raised in the petition were first reported by El Paso Matters.

Unlike many states, Texas does not allow for voters to recall elected officials, except in home-rule cities that adopt such a provision in their charters.

The only way to remove elected county officials, including district attorneys, is through a court process.

The basics of the process is outlined in the Texas Constitution. State law allows for people to petition a district court to remove an elected county official on the grounds of incompetency, official misconduct, or alcohol intoxication.

The petition cannot go forward unless a district judge issues an order for citation.

If a citation is approved, the judge has the power to temporarily suspend the official and appoint an interim replacement, but is not required to do so.

The ultimate decision on removal from office would be left to a jury. The County Attorney’s Office would represent the state in a removal trial.

In 2018, a jury removed the Tyler County district attorney, who was accused of not showing up for work and not performing her duties, which critics said had contributed to a criminal case backlog.

Earlier this year, a judge rejected a petition for the removal of Midland County District Attorney Laura Nodolf. That petition was brought by a man acquitted of a murder charge in the death of a police officer.

In 2013, a Travis County judge rejected a removal petition against District Attorney Rosemary Lehmberg, who had been convicted of drunken driving.

This article first appeared on El Paso Matters and is republished here under a Creative Commons license.