On Sunday, the town of Van Horn celebrated the 100th birthday of Mrs. Hazel Walker with a parade followed by cake and ice cream at the Hotel El Capitan.

In attendance were Mrs. Walker’s son and daughter-in-law, Dennis and Becky Walker, their son Kyle and his wife, their three daughters, caretaker Alicia Lopez, as well as many other extended family members and friends. Mrs. Walker was transported along the parade route via a horse-drawn carriage, followed by her beloved Red Hat Ladies, friends and family.

Mrs. Walker was born on February 28, 1916, as the Great War raged in Europe and Pancho Villa was creating havoc along our Southern border. Automobiles and airplanes were new and sliced bread had yet to become readily available.

When she was just seven years old, she and her family travelled from their home on a wheat ranch in Bennett Colorado to settle in Missouri. She talks about how much she and her three siblings enjoyed eating store bought bread and canned pork and beans. They camped along the route, repairing or replacing the tires daily and on more than one occasion, the 1921 Ford touring car needed to be pulled out of the mud by horses.

As a child, Mrs. Walker was taught to be thrifty. “Nothing went to waste.” said Hazel. She learned to quilt at around age 7, and even at a very young age, when any clothing or cloth goods began to wear out, they would be torn into strips and braided or crocheted into rag rugs. “When we lived in Colorado,” she explains, “we would take those rag rugs out on the porch and watch the stars at night, or for a time, the oil well fire burning in the distance that lit the sky.”

It was in this spirit of thrift that she learned to quilt and at the age of 100, she is well known for approximately 200 quilts she has made. The quilts were displayed on the bales of hay in the parade trailers.

In 1941 Hazel Shafer met Mr. Raymond Walker, who would become her husband in 1942 at a very small ceremony in Lovington, New Mexico, the only witnesses were close friend and the friends’ 3 year old daughter.

She talks about how World War II affected their lives.  Sugar and other goods were rationed. There was a long wait for bigger purchases. Mr. and Mrs. Walker registered to purchase a new car in 1943 and were unable to complete the purchase until 1949, well after the war’s end.

Mrs. Walker spent most of her adult life in Malaga, New Mexico, near Carlsbad. She was the cafeteria cook manager for 25 years, first in Malaga and then in Carlsbad after the schools were merged.

Her son Dennis was born in May of 1956, and she returned to work in the cafeteria the following school year, with her son and a caretaker for the infant in tow.

Son and daughter in law Dennis and Becky Walker live near Sierra Blanca and after Mrs. Walker’s husband’s death in 2002, Mrs. Walker chose to move closer to her family. A very independent woman to this day, she wanted to have her own home rather than moving into theirs, and Van Horn was the best choice.

In Van Horn, Mrs. Walker has found a welcoming home. Making friends with the Red Hat Ladies group and more people than could be easily counted. She retains her bright and cheerful outlook as well as a quick wit and a propensity for calling things as she sees them. When asked what she thought of her trip down the parade route in the horse-drawn carriage, Mrs. Walker replied “It was slow!”.  She’s a very modern centenarian. 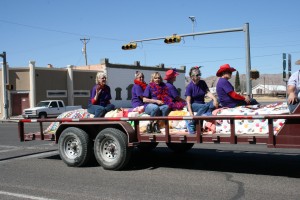 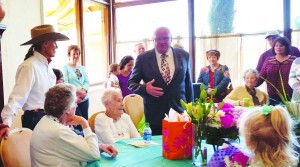