Aditi Pandey of Nepal is working on a master’s degree at the Texas A&M AgriLife Research and Extension Center in Beaumont.

BEAUMONT — Aditi Pandey is one of more than 1 million young adults who left their native countries last year for an education in the U.S.

About 21 percent of the foreign students came to study engineering, another 19 percent came for business and management, and almost 14 percent came for computer science and math degrees, according to the 2016 Institute of International Education’s Open Door report.

After completing a bachelor’s degree in her native Nepal, Pandey’s family allowed her to follow an 8,440-mile dream to the Texas A&M AgriLife Research and Extension Center in Beaumont. Her heart was set on earning a master’s degree by learning ways to help farmers in her country produce food sustainably on their land.

Pandey is unique not only for choosing agriculture but because she’s a girl who, she said, by the code of her village in Nepal should have stopped school the minute she learned to read and write so her parents could save for her wedding dowry.

Agriculture has been a global ticket since the dawn of time. For millennia, traders have crossed sea and country bringing local commodities to new lands and hauling back goods from afar.  But increasingly, today’s markets are more about producing enough food for the world population, scientists say.

Of the 1 million foreign students, some 12,300 — only a little more than 1 percent — are pursuing agriculture, the Open Door report noted, though researchers worldwide are clamoring to discover ways to feed the estimated 9 billion people on the planet by 2050.

Though agriculture students only comprise a tiny percent of the total number of foreign students, agriculture grew as the field of choice by 15 percent between the 2013-14 and 2014-15 school years, according to the Institute of International Education report.

“There’s a connection between food, energy, water, sanitation, health, nutrition and also smart politics,” said Dr. Fred Davies, Texas A&M University Regents professor and Senior Borlaug Fellow of Horticultural Sciences in College Station, and a senior advisor for the U.S. Agency for International Development. “So the whole thing is interconnected. And this is the first time in human history where the availability of water, land and nutrients are not going to increase. So how do we become more efficient?”

The AgriLife center in Beaumont has long been a landing spot for foreign researchers and graduate students because the facility focuses on rice, a major staple worldwide. Rice feeds more than half of humanity, according to the United Nations Food and Agriculture Organization.

Because most Texas rice is grown along the Gulf Coast, the Beaumont facility has been researching the crop in that region for more than 100 years. Top scientists from U.S., China, Vietnam, India and the Philippines are there to work on variety development, entomology, plant diseases, plant physiology, weed and water management, genetics, and soil and crop nutrition.

The center also reaches out to graduate students worldwide and hosts area public school science teachers for hands-on instruction to take back to high school classrooms. The goal of both efforts is to convey an urgency that in order to keep up with the world food demand, young minds need to fill the shoes of numerous well-known researchers who are approaching retirement, officials said.

“One of our missions is to extend our research and knowledge to the community,” said Dr. Mo Way, AgriLife Research entomologist in Beaumont and organizer of the annual science teacher in-service day for the region. “And beyond that, my colleagues and I have talked about whether there will be anyone to replace us in a few years when we retire. 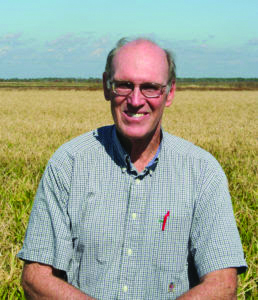 “So this is one way to get kids interested in biology and life sciences and math. They are the future. We need more students understanding science and being interested in it. There is nothing more important than the production of food,” he said.

Back in Nepal, Pandey was the only child of her mother and father, a career military man in the Nepalese Armed Forces. Though her immediate family was not involved in agriculture, Pandey said, she is following the footsteps of a great-grandfather who was.

“I have always wanted to be in science and especially in sustainable development,” said Pandey, who came to the U.S. in August 2016 and is researching greenhouse gas production in organic versus conventional rice systems. “Sustainable agriculture is the key to helping our farmers back home.”

Chief among what Pandey has learned by comparison is that Nepal is almost devoid of long-term agriculture information, the likes of which have been recorded for decades in the U.S.

“You can’t go online and find out about the soil in Nepal, for instance,” she said. “I have realized that keeping data for a really long time becomes very precious eventually.”

But what she would like to impart to American students pertains largely to the privileges of women in this country.

“I hope to let girls here know what women in our country go through for the opportunity to learn,” Pandey said. “I want them to know how lucky they are to have parents who are sending them to school to finish their degrees.”

She plans to pursue a doctoral degree after completing her master’s, which is “something that doesn’t happen very often for women back home.”

The advances in agriculture also stand out for doctoral student Shankar Gaire, also of Nepal, who is studying plant pathology and microbiology.

“In my country, they are still producing with subsistence type of farming as opposed to the commercial farming here in the U.S.,” said Gaire, noting that his grandfather tilled a field behind an ox-drawn plow, something gone from the U.S. farming landscapes for more than 70 years. “Knowing that this kind of subsistence system still exists in some countries will help us solve the issues and bring about more food security.” 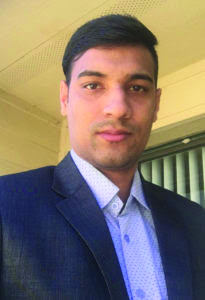 Gaire plans to return to his country to research ways of improving the production of rice through the management of plant diseases.

Three scientists on the faculty at the Beaumont center also make the connection between how their efforts to improve the Texas rice crop extend beyond borders. Drs. Sai Sree Uppala of India, Abdul Rasack Mohammed of India and Rodante Tabien of the Philippines all have had to sacrifice along the way in order to become U.S. researchers.

In a way, Uppala empathizes with plants, which are not able to move when diseases attack. Eight years ago, Uppala was diagnosed with leukemia and underwent successful treatment in the U.S. while completing her doctoral degree at Auburn University in Alabama. Had she not come to a U.S. graduate school, Uppala most likely would not have gotten an early diagnosis in her small Indian village without access to medical facilities. 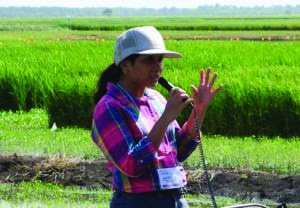 “Stepping out of my village was a big step out of my comfort zone because most of my friends got married right after they graduated from high school, which is generally the norm there,” she recalled. “My parents were very supportive of me and my sister’s education. They  sent me — the first girl in our family and our village to study outside our state — and I became the first person in our family and village to receive a doctorate.”

Thus, discontinuing school didn’t enter her mind when Uppala found out she had leukemia.

“Because 100 years ago no one in my family would have thought that one day a girl from our family would go to America and pursue her dreams. Education provided wings for my thoughts and visions. Now, I am given this opportunity and a second life. I want to do much more for farmers as well as women in India and around the world,” she said.

“Working here at Texas A&M is giving me a new perspective and providing so many opportunities that I would never have known existed. I’m grateful that these experiences are shaping me as a new person, and when I go back I will be able to talk to the girls in our village. For them, it is thought that getting an education in America can only be dreamed. I want them to know they can achieve it if they really put their heart into it.”

She noted that agriculture is the backbone of the Indian economy, providing employment to 60 percent of the workforce.

“Right now, amidst climate change, accelerated population growth and urbanization in the world, agricultural research provides opportunities for a person to make a difference,” Uppala said.

Mohammed offered a slightly different take on agriculture research stemming from his family’s middle-class roots in India. Coming from a city, he said, meant fewer pressures or stigmas than those of smaller, rural villages in India. Yet part of his family’s rural history – his paternal great-great-grandfather was a rice farmer and his maternal grandfather was a maize, corn and sugarcane farmer – made him aware of the hardships still present for young Indian girls who don’t have access to learning. 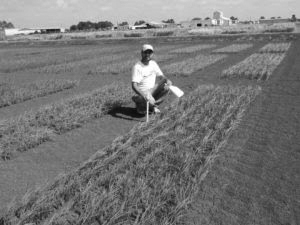 “I wanted to become a researcher, and I was interested in science,” he said, explaining he was given a place in agriculture for his undergraduate degree in India and that piqued his interest. After getting his master’s at Mississippi State University on climate change, Mohammed earned a doctorate at Texas A&M University via the AgriLife center in Beaumont where he studied global warming. He continued as a post-doctoral researcher at the center looking for ways to negate environmental stresses on rice, cotton and corn.

He, too, has noticed the difference access to data can make in scientific advancement. And while Americans may think there is a disconnect between rural and urban locations, Mohammed sees the U.S. incarnations of each as informed and developed compared to their Indian counterparts.

And while several of the women in his family are educated and working as teachers, he realizes that privilege has long been denied to rural girls. So, Mohammed and his family contribute to non-profit organizations that provide stipends and scholarships to rural Indian girls who want to pursue their education.

Lack of money and a system that favors the older sibling of a family might have determined that Tabien would be a coconut farmer in the Philippines, but his high school grades made the difference.

“I was the little brother, but I got an opportunity to step ahead of my older brothers and sisters. I now want to make sure other kids get a chance to do science,” said Tabien, AgriLife Research inbred rice breeder.

As a child in the ‘60s and ‘70s, Tabien was accustomed to the U.S. customs taught in his Filipino school.

“The culture had a lot in common with American ways. When I was young, I was reading donated books printed in the USA,” he said. “We were singing ‘America the Beautiful,’ and there was a logo showing a handshake between the Philippines and America. 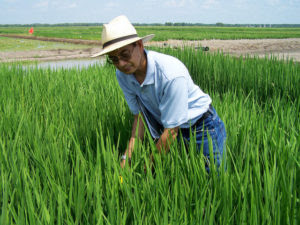 Rural Texas was meant to get 10% of state bonds for...

Rural Texas was meant to get 10% of state bonds for...