In a Year of Drought, Birds Become a Warning, and a Prompt to Change

“How do you know but ev’ry bird that cuts the airy way is an immense world of delight, clos’d by your senses five?”

In his characteristically visionary style, the poet William Blake captured a sense of wonder many of us have felt. Birds can seize our imaginations – in their beauty, their intense vitality, in flight and song.

Their plight on our continent is dire. A recent report found that 3 billion birds – a quarter of the North American population – have disappeared since 1970. For some species, the crisis is especially acute. “Grassland specialists” – small, secretive birds found in West Texas prairies and plains – have declined 70 percent during the last 50 years.

Birds are markers of our effects on the natural world – a fact that’s been brought home in 2020, a year of record heat, drought and wildfires. They’re also an invitation – to participate in the community of life in a different way.

“This will go down as the driest April through September on record here at Midland International Airport,” Hluchan said. “It even beats 2011, which everyone knows was a horrible year.”

While the year started wet, much of West Texas has received less than 2 inches of rain since March. The North American monsoon – which historically brings the majority of the Southwest’s rainfall – failed for a second consecutive summer.

Large parts of our region – from Presidio County to Midland-Odessa – are now witnessing “exceptional drought.”

And the immediate future isn’t promising. A “La Niña” pattern is taking hold, which is apt to mean a warm, and dry, winter.

“It’s very likely that we will stay in drought until some time next year,” Hluchan said, “if not longer. Unfortunately, that’s where we’re at, and that’s what we’re looking at ahead.”

Next year could bring wildfires, and water restrictions. But in wild systems, the impacts are already plain. In New Mexico, catastrophic die-offs of migratory birds – in which drought may be a factor – have made national news. But other impacts might seem counterintuitive.

In the native-plant garden and at feeders at Hedges’ Davis Mountains home, the birding this year is stunning.

“I’ve never seen more volume of hummingbirds in the 25 years I’ve lived here,” she said. “That’s good for me as a birder – with literally hundreds of hummingbirds in my yard – but that just means birds are not dispersed in the landscape using their natural food sources. They’re concentrated at feeders and little home gardens, because that’s all they have.”

The same phenomenon has been seen across our region. Birds have been denied the insects and other foods they need by drought. They’ve turned to human habitations and communities, with their relative lushness, for refuge.

Cecilia Riley is the former director of the Gulf Coast Bird Observatory, retired now to the Davis Mountains. On Sept. 11, she made a birding trip to Balmorhea. Balmorhea Lake – which in most years is a hot spot for wintering water fowl – was almost entirely dry. But in town, her eye was drawn to a puddle of water in a culvert, beneath a giant old tree. The ornithologist had never seen anything like it.

“There was the biggest flock of birds I’ve ever seen, in that tree and on the ground around it,” Riley said. “It turned out to be at least 1,500 yellow-headed blackbirds. They had come down in huge numbers from Canada. There were all kinds of warblers, vireos, kingbirds, other types of flycatchers, and little spizella sparrows – the chipping, clay-colored and Brewer’s sparrows. There were just hundreds, hundreds of them – all going to this little puddle of water.”

She began to document the 70-plus species. But the app she uses “flagged” her entries: these birds weren’t supposed to be here, at this place, or this time. Many summer in the Northern Rockies or Cascades. They were a month ahead of “schedule,” and east of their typical migratory routes.

Drought and wildfires may have prompted their early departure. And as dry as things are here, they’re worse farther west. A puddle in Balmorhea was the only water these birds could find – to drink, and to wash for their continued journeys.

David Larson is the Fort Davis National Historic Site superintendent, and a passionate birder. At his Alpine home, he’s let a 30-by-30-foot patch of his lawn “go to seed” – and native grasses have flourished beneath a cottonwood.

The patch has been a sanctuary for birds this year. Larson said his sons are not longer surprised when he runs outside with his binoculars. Birds typically found in grasslands – like the spizella sparrows – are now foraging in his yard. And Larson too has seen birds usually found farther west – like the luminous lazuli bunting.

He’s had painted buntings – a near threatened species – make themselves at home.

“For about a week and a half, I saw approximately 10 buntings in my front yard,” Larson said. “These buntings were just loving that patch. I just sat back and watched these beautiful seven-colored birds, up in the trees, down in the grass. For a week or so, they’d go to roost, but they’d come back in the morning, and they’d be there in the evening.”

Larson’s yard may not be “clean,” he said, but it’s sustaining not only birds, but native bees and butterflies.

This drought will pass. But human-driven climate change is warming the globe, and our region is becoming hotter and drier. If diverse birds, and other living things, are to endure, Riley said we’ll need to embrace Larson’s example. That, she said, means providing water – in shallow basins, near shelter – and refraining from insecticide use.

“Backyard habitats can become mini refugia for these birds,” Riley said. “People have to do it. We screwed it up – we’ve got to fix something. It has to happen or we’ll have nothing – the skies will be silent.”

Michael Nickell is museum scientist at Midland’s Sibley Center. A lifelong West Texan, he’s watched weather patterns change – and songbirds decline. He too thinks a fundamental shift in attitude is called for.

“To me, that’s at the crux of the matter: we have a tendency to think of ourselves as so superior to everything else,” Nickell said. “You look at the big picture of all living things, and we’re all sharing this planet, we’re all taking up space and using the same resources, and we need each other. We really do.” 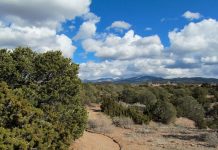 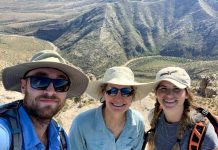 Nature Notes | In the Guadalupes, Geologists Trace Pangaea and the Paleozoic Past