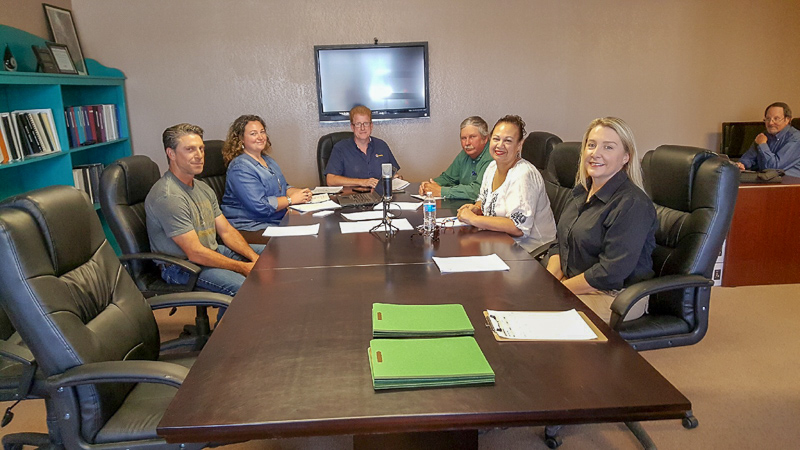 Culberson County Groundwater Conservation District (CCGCD) met on May 9 for it regularly scheduled monthly meeting and on May 16 for a called meeting.

In attendance at the May 9 meeting were Directors Vance Cottrell, Cruz Parada, Lane Brewster, and David Robb. Outgoing Director Cuco Corralez was absent. General Manager Summer Webb updated Directors on the Metering Program. At present, 2 of 3 meters that have been purchased are operational in the Lobo Valley. These meters are providing data on irrigation water usage amounts. More wells are needed for the complete metering system.

More meters and monitors will be purchased through grants that CCGCD will receive this summer. The data retrieved from the meters will represent accurate groundwater levels and amounts of water being consumed throughout the District.

Mrs. Webb recommended a second meeting on May 16 at which time Dr. Al Blair will address Change Orders and confirm which Applications for underground water use will be heard and acted on during the June 14 Public Hearings. Currently, one Application has been deemed complete and ready for consideration.

Director Cottrell remains as Chairman while Director Brewster was selected for Vice Chairman and Director Robb was chosen for Secretary.

General Manager Summer Webb and Dr. Al Blair addressed Directors on the Water Metering Program and the Orders of Consumption. These Orders are required by the State every five years and are due in 2019. Dr. Blair stated that he did not foresee any major changes that had to be made at this time.

Dr. Blair told Directors that the new Metering Program would give the data that is needed to assess groundwater levels and usage by consumers accurately. He also stated that there was “no discernible drawdown” of groundwater in the Michigan Flats Aquifer. Citizen Richard Koehn contested this statement.

Mr. Koehn reported that a recent groundwater level measurement on his property in Michigan Flats Aquifer showed a 1 foot drop over the last year. He related that the well that had been used by the District was non-operational; therefore, groundwater level measurements were misleading. To correct this issue, Mr. Koehn volunteered an alternate water well, which is operational, as a site for the 3rd water meter which has not been put into service.

The public is encouraged to attend this very important hearing and learn how groundwater is being used.