VAN HORN – Two years ago, U.S. Rep. Will Hurd, R-Helotes, survived a grudge match against his Democratic predecessor to become the first congressman to win re-election to this perennial swing district in eight years, carrying it by some 3,000 votes while Hillary Clinton won it by about 8,000.

It was the most expensive U.S. House race in Texas history, it centered on whether Hurd was as independent as he claimed to be and it became inevitably intertwined with the rollercoaster presidential contest. Weeks before Election Day, a 2005 tape of Donald Trump making vulgar comments about women surfaced, prompting Hurd and some other vulnerable House Republicans across the country to disavow their party’s presidential nominee.

Two years later, Hurd has emerged as arguably the most prominent Republican from Texas willing to split with Trump – or at least strike a different tone – on some key issues, including immigration and Russian interference in the 2016 election. It is a profile that has earned him national attention and bipartisan plaudits – and it has only hardened Democrats’ resolve this November to try to puncture the image he has crafted as a different kind of Republican.

“It’s going to be difficult to make that case because we’ve been proving our independence for three and a half years,” Hurd said defiantly during a recent interview in Alpine as he traveled the district. Taunting his Democratic critics over what he described as a tired attack, Hurd added, “Keep doing it.”

Up against Hurd this time is Gina Ortiz Jones, a former Air Force intelligence officer who made it through a spirited five-way primary in March and less-competitive runoff in May. On the stump, she is a no-nonsense prosecutor of Hurd’s claims to separation from the national Republican Party.

Ping-ponging between Democratic and Republican control before Hurd won re-election, the 23rd District is famously fickle and was viewed as the only true swing district until this cycle. In November, two other GOP-held districts in Texas – the 7th in Houston and 32nd in Dallas – are newly in play after Trump narrowly lost them in 2016. 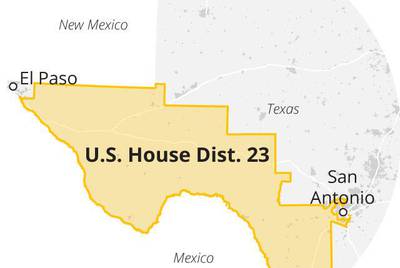 –A map of Texas Congressional District 23.

But none is quite like the 23rd, a Hispanic-majority district that stretches from San Antonio to El Paso, covering hundreds of miles of Texas-Mexico border in between for a total area larger than 29 states.

Hurd, a former CIA agent, first ran for the seat in 2010 and did not make it out of the primary. He came back in 2014 and unseated the Democratic incumbent, Pete Gallego, who quickly committed to a rematch two years later. Their 2016 battle was bitter, and Gallego even considered another go last summer before taking a pass.

Since his re-election, the spotlight on Hurd has only grown. He became known to many outside Texas for the first time last year when he teamed up with a Democratic colleague, U.S. Rep. Beto O’Rourke of El Paso, to go on a road trip from San Antonio to Washington. In the House, he has banded with other moderate Republicans to push for a permanent legislative solution for “Dreamers,” or young people brought to the country illegally as children. And he has spoken out against Trump on a number of issues, more recently slamming the president in a New York Times op-ed for failing to stick up for the U.S. intelligence community and letting himself be “manipulated” by Russian President Vladimir Putin during their July summit.

Jones sought to quash the fanfare surrounding the op-ed by pointing out, among other things, that Hurd missed a House Intelligence Committee vote after the summit where he could have pushed to subpoena the summit translator, a move the Republicans present blocked. To Democrats, it is rebuttals like those that they believe they must hammer nonstop to undermine Hurd’s turns in the spotlight as an independent voice.

Juan Moreno, a Jones volunteer from La Salle County who previously worked for Gallego, said he has been pressing the same piece of advice to local leaders and activists.

“Use Hurd’s record – that’s the best foil that Gina and her campaign could use,” Moreno said. “The guy’s not moderate.”

Democrats have a counterpoint ready to go for every supposed act of independence by Hurd, but no topic has drawn fiercer claims of hypocrisy than health care. Jones, who has called it the No. 1 issue in the race, is slamming Hurd for voting eight times to undo former President Barack Obama’s signature health law prior to breaking with his party last year to oppose its repeal-and-replace effort, which narrowly passed the House but died in the Senate.

“In your own life, do you look at what somebody did to you eight times or one time?” Jones said in an interview. “I would argue he’s shown us exactly where he is on health care.”

In Alpine, Hurd maintained that the 2017 proposal, the American Health Care Act, was a “substantively different” piece of legislation than the eight previous ones to which Jones refers. It would have gone much further than the prior bills in negatively impacting Medicare, he said.

To be clear, Hurd is also playing offense. He has seized on comments Jones made during the primary expressing openness to another round of Base Realignment and Closure, the process by which the military assesses its base structure that requires congressional approval. Her position drew fire from primary opponent Jay Hulings, who likened it to “playing Russian Roulette with people’s jobs” in San Antonio – Military City USA – and whose criticism now factors prominently into a minute-long TV ad from Hurd.

While insisting she wants to protect jobs and does not support closing military bases, Jones says she believes “we owe it to our military leaders to at least evaluate the information they provide us” and go from there. Opening that door, though, is a step too far for Hurd.

“To even allow it to go forward with the potential to have such a debilitating effect on our communities,” Hurd said in the interview, “is unacceptable.”

Other attacks in the race are falling along familiar lines. On TV, the National Republican Congressional Committee has been bashing Jones as beholden to U.S. House Minority Leader Nancy Pelosi, who gave $4,000 to Jones’ campaign during the Democratic primary runoff. Jones has said that if Democrats take the House in November, she would want to see who all is running for speaker before making a decision about whether to support Pelosi.

At the end of every summer, Hurd hits the road for a town hall tour of the district that takes place mostly at Dairy Queens. At each stop on latest swing, which took place throughout last week, Hurd came prepared with a message that acknowledged the economic progress under Trump but did not shy away from the thornier questions percolating among Republicans in Washington.

“The one thing that’s going to get in the way of this super-charged economy is not having the workforce to take advantage of this opportunity,” Hurd said in Fort Davis. “That’s why I think it’s crazy some of the conversations we’re having around immigration. We should not be decreasing the number of immigrants. We should be increasing them – legal immigration.”

Hurd’s stops were filled with reminders of his unique political standing – both the upsides and the downsides. In Marfa, Hurd received a glowing introduction from the Democratic county judge, Cinderela Guevara, who praised his effectiveness as a lawmaker and said his “responsiveness is unparalleled.”

At the same stop, Hurd encountered Rick Treviño, the Democrat whom Jones defeated in their primary’s May runoff. Treviño asked Hurd a series of questions, including how he felt about being a minority in a party that Treviño accused of rallying its base around “cultural provocation.” Hurd, who is black, insisted the GOP was “not homogenous.”

The next morning in Alpine, Hurd fielded a question from a local environmental scientist named Charlie, who said he appreciated Hurd’s record on natural resources but added the congressman seems like he lives “on a lonely island in the Republican Party.” Hurd acknowledged he may be an outlier in his party but argued he can show his party it “can be conservative and protect the environment at he same time.”

Afterward, Charlie, who declined to provide his last name, told reporters he was undecided in the election. While he liked Hurd, Charlie said, he found Jones just as strong on the environment – and unlike with Hurd, he knows for sure her party would prioritize the issue.

Jones also encounters the blurred political lines in the race. Fielding questions earlier this month at a meeting of the Boerne Area Democrats, Jones heard from a woman who expressed exasperation with the mail she was receiving from Hurd touting his support for Medicare. “Is he running as a Democrat? It’s so confusing,” the woman said. “How can we expose the hypocrisy?” Jones said she felt the woman’s frustration – and directed her to a website her campaign had already set up: HurdsHypocrisy.com.

Unlike in 2016, the race is unfolding this cycle in the shadow of an action-packed U.S. Senate contest – and it has created some tension in the 23rd District.

O’Rourke, Hurd’s road-trip companion, is running against U.S. Sen. Ted Cruz, R-Texas, and has declined to endorse Jones out of fear of spoiling his ability to work with Hurd in Congress. Hurd has similarly said he would not insert himself into O’Rourke’s race, including when asked Saturday at a town hall in Fort Davis whether he would endorse Cruz.

“Ted Cruz and Beto are good friends of mine, and I am not going to do anything that can be used to attack either one of them,” Hurd responded. “That being said, I actually think Ted Cruz is going to win this election. It is still Texas.”

Jones said in the interview that she was “very hopeful” O’Rourke prevails against Cruz. “But when it comes down to endorsements,” she added, “the one I’m worried about are the voters of Texas 23.”

In addition to Hurd and Jones, Libertarian Ruben Corvalan is also on the ballot in the 23rd District. Early voting starts Oct. 22.

This article originally appeared in The Texas Tribune at https://www.texastribune.org/2018/09/26/will-hurd-gina-ortiz-jones-trump-record-cd-23/. 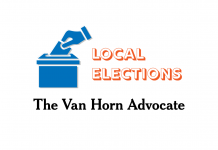 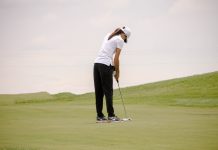