Culberson County Commissioners were presented with an impassioned plea from representatives working in the northern part of the county to do something to address the emergency service needs of that area. At this time, there is no facility nor personnel to provide law enforcement, fire-fighting, or emergency medical services even with an estimate, although not official, that more people are working in the northern County area than living in Van Horn.

Sheriff Oscar Carrillo has been advising the Court of the seriousness of the issue for many months. However, a recent death at one of the sites brought the matter to a head. Earlier this week, Sheriff Carrillo and JP#3 Michael Davis received a call in the early hours of the morning regarding a death due to an apparent heart attack. Carrillo and Davis made the trek to the site, taking them about 2.5 hours to get there due to the distance, the high traffic rate, and the condition of the roads to the site. Sheriff Carrillo noted that it was about 150+ miles. The problem was compounded when Carrillo could not find anyone to transport the deceased in a timely manner. He ended up bringing the deceased back to the hospital morgue himself.

Bill Abel and David Perrin, from a company contracted to Chevron where the incident occurred, spoke to the Court with choked voices and tears in their eyes explaining their devastation over the situation. Abel exclaimed, “My God, people, what have we come to!” They had to wait with their fallen coworker for hours before outside assistance arrived. Abel also stated that we need to “readdress our moral compass,” noting that the people that live and work in northern Culberson County are just as important as those in Van Horn. Perrin praised the compassion and professionalism demonstrated by Carrillo and Davis, but noted that the delays are unacceptable. It was also noted that if there is a severe rainstorm, the low crossing areas are flooded preventing access to the job sites by any emergency service coming from Van Horn. Abel stressed the need for “humanity and dignity for people that are deceased” and quicker response times for true emergency situations. He noted that the oil and gas companies would be willing to work with the County to come up with viable solutions.

Carrillo presented data on the development in the north-eastern part of the county, stating that “it is a monster up there…and it is growing by the month.” Previously, some assistance for emergency services was provided by Reeves County or Carlsbad since they are closer to the work sites, but that assistance is dwindling. The new-comers are having a hard time accepting how things have been done in our frontier area, not understanding the delays due to distance and limited personnel. Carrillo stated that over 300 permits were filed last year alone with 414 producing leases. This creates a plethora of jobs, but also a plethora of problems. According to Carrillo, theft is rampant in the area. One company has informed Carrillo that they are allowing their employees to carry guns in an effort to deter theft since there is not any consistent law enforcement coverage. Carrillo stated that he just does not have enough personnel to cover the entire county.

Commissioner Gilda Morales noted that the County has no jurisdiction over the EMS since that is under the purview of the Culberson County Hospital District (CCHD). Becky Brewster, Chief Financial Officer for CCHD, responded that the District has been discussing the most feasible means of providing EMS services to the developing areas in northern Culberson County, noting that thus far, the District has not been approached by any of the companies located there to discuss the issue. The District is taking a proactive stance looking into alternatives such as contracting with nearer entities, locating an ambulance in the area, and providing EMT training to employees that work on-site. The biggest issue is the lack of qualified personnel.

The County will continue to explore alternatives and work with the oil and gas companies to arrive at a solution. Carrillo will be taking the Commissioners on a tour of the area in the near future so they can visualize the situation more clearly.

Carrillo also noted that he sometimes has difficulties in finding a JP to travel with him to handle death situations, noting that a JP is needed to pronounce someone dead. He stated that it takes both the JP and law enforcement to complete the required protocol, noting that the JP is the only one that can request an autopsy. Rita Carrasco, JP#1, and Betty Velez, JP#4, were on hand to state that the JPs have never declined a call. Occasionally dispatch has called the office number outside of office hours rather than the cell phone which means that the JPs are not receiving the request. Carrasco informed the Court that the JPs have always coordinated among themselves to make sure someone is in town and available. She further stated that the JPs would be willing to work among themselves to develop a schedule to coordinate with the Sheriff’s office.

Summer Webb and Vance Cottrell, representing the Culberson County Groundwater Conservation District, discussed increasing the boundaries of the District to encompass the northern part of the county, noting that this process would ultimately take legislative action. When the District was formed, it excluded the brackish water deposits in the northern county, and only covered the areas with potable water sources (Lobo, Michigan Flats, and Wildhorse). Now, with the extensive use of the brackish water in the northern County, primarily being used for fracking, the District does not have access to information on the water usage (which can ultimately impact our fresh water sources), nor does it have any jurisdiction to regulate usage or exportation of water. The Commissioners were agreeable to expanding the District to cover Culberson County in its entirety and will consider a resolution of support at the next regular meeting.

The Commissioners then awarded a bid to DBT Transportation Services, LLC for $181,885 for the AWOS system to be installed at the airport. The County is responsible for 25% of this cost, with grant funds covering the balance. Judge Carlos Urias noted that he will be meeting with Parkhill, Smith and Cooper in November to begin planning activities for the $1.7 million airport renovation project. The County will be responsible for 10% of this project cost with the Texas Department of Transportation funding 90%.

In other County business, the Court also:

• Held a close-out Public Hearing on the TDA grant for improvements to the Veteran’s Memorial Park.

• Heard a report from the County Extension Agent on 4-H activities.

• Authorized AMA TechTel to provide Christmas activities for seniors at the Nutrition Center providing no solicitation for internet services occurs.

• Discussed the appointment of election judges for the November 6 election.

• Approved monthly payroll and expenses for September and payment of current bills. 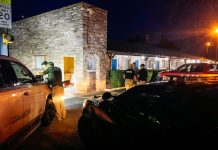